Brenda Jones and I found each other at the 2009 NC Quilt Symposium at Peace College.   We talked about some tops that she has pieced in the 80s.  She found my card a couple weeks ago and asked me if I would quilt her tops. 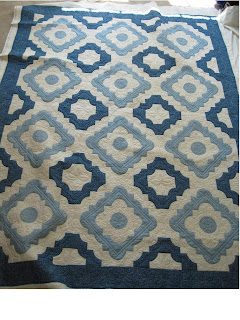 I went back and forth trying to decide whether to use feathers or leaves on this quilt.  The leaves won out.  I did wreaths around the centers of the light blue areas.  I decide not to quilt heavily in the light blue ring and instead did concentric squares. 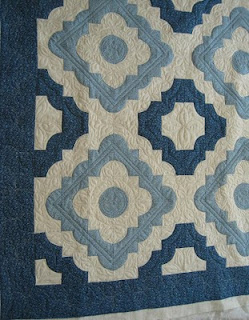 In the dark blue areas I echo quilted the shape and then quilted leaves and tendrils on the inside.  The background is quilted with a leaf and tendril allover file. The border is done with a larger version of the same design. 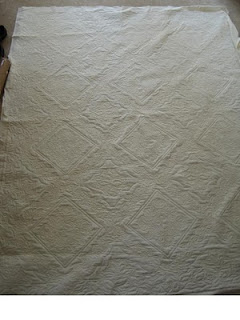 The back really shows off the quilting.
Posted by Thread Waggle Quilting at 1:19 PM 1 comment:

Have you heard about the new M&M wheels from APQS?  I wasn't really sure I needed them, but in a moment of weekness last week I order a set.  Today was the big day, we installed them on my Millie. 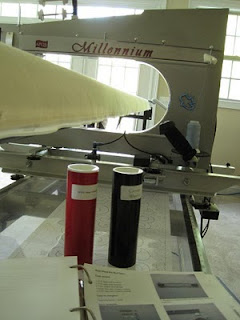 APQS has done a great job in packaging the wheels.  The instructions are step by step with loads of pictures.   They have even color coded the tubes so that you know which set is for the the head and which is for the carriage.   The only mistake I made was that I was not paying attention and I used one of the ones that is pre-drilled for the sprocket and I had to uninstall it so that I could use it with the sprocket.   I even did most of the install myself, but I let Matt play too. 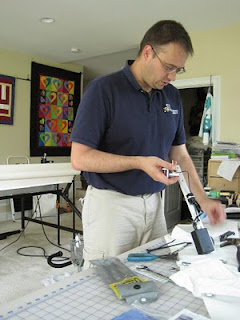 He is finishing up the last 2 wheels for me, little does he know that I only let him help so that I could take his picture and post it on the blog.  It took us just over an hour to install the wheels and put the head back on. 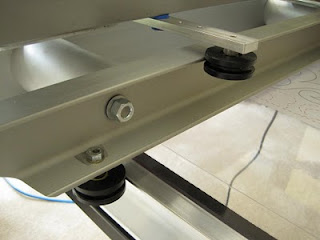 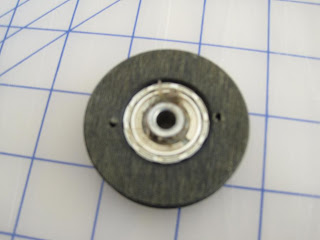 And even though I clean my rails and try really hard to make sure that there is no thread the old wheels had a greasy thread nest.  YUCK!!!!
I loaded practice cloth and played.  OH MY!!!!  Then I loaded a quilt and did my swirly meander.  Why, oh why did I think that I did not really need these wheels?  They are fabulous!
Posted by Thread Waggle Quilting at 7:14 PM 1 comment:

While meeting with a customer who wanted me to quilt a top that she had pieced for her granddaughter, she asked me if I could quilt the granddaughter's name onto the quilt.   The customer did a great job in picking out the fabrics for this quilt it is done in mostly pinks and greens.  I thought quilting the name is was such a great idea that I would share with you how it turned out. 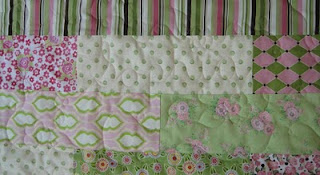 The quilting is an all over loops with flowers and leaves.
Posted by Thread Waggle Quilting at 4:23 PM No comments:

Hollie made a beautiful batik top using Terry Atkinson's Fire Escape pattern.  She chose fabrics that are water colors and her backing fabric has tropical fish on it.  When she first talked to me about the quilt she was thinking of having me load it with the backing up and tracing the fish.  The fish were too small for me to do this effectively so we brainstormed and came up with a different plan.  This quilt was an absolute BLAST to quilt.  There are fishing lines with hooks and worms, fish swiming through water meander, a star fish, an anchor and coral and seaweed on the bottom.  Longarmers talk about what we do as drawing with a sewing machine, but this is the first time I actually drew a picture with mine. 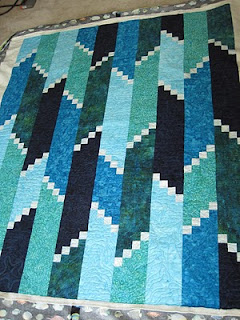 The batiks she picked out were perfect for a water scene.  She did a great job of getting blues and teals in the blue to green range. 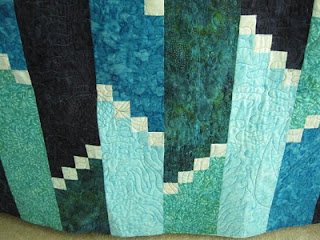 I love the texture on this quilt.  The seaweed at the bottom was a great way to add movement and depth to the quilt.  Plus it gave me a way to add an anchor. 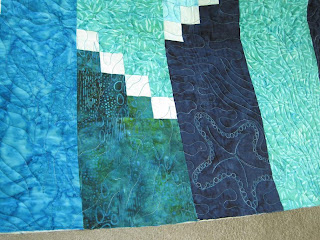 When I orginally quilted the starfish it just did not show up.  So I did a line of pebbling around the edge and quilted in the lines that you see on a real star fish.  I really like the way it turned out. 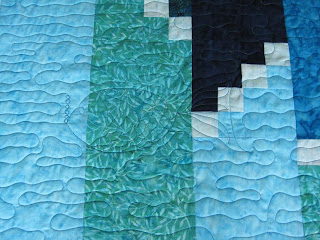 The fish needed to have attitude so that they would stand out against the water meander.  So I quilted in scales in the body and streamers on the tails.  Without the file they would have been just too plain and would have receded into the background. 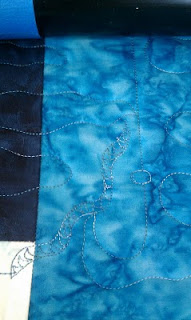 It even has a couple of hooks with worms on them that the fish are ignoring.  Just another peaceful day out on the lake...
Hollie pieced this top as part of the Olympic Challenge on Anna Norris's Blog.
Posted by Thread Waggle Quilting at 8:00 AM 1 comment:

Lana pieced this cute quilt for a lucky young lady that loves horses.  I wanted to so some form of wreath in the large, open blocks with the blue background and some form of feather in the large black border. 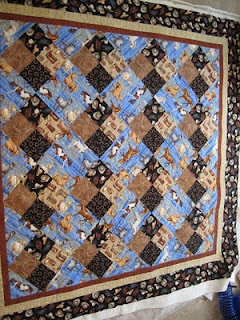 There are fire flowers in the the setting triangles by doing a large swirl and then quilting flames around the outside edge.  I used circle templates to make the 2 concentric circles in the open blocks and then did flames to make the wreaths. 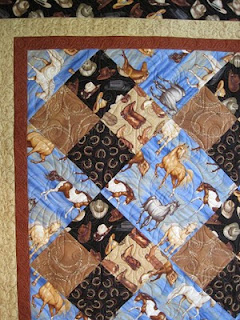 I used my swirl that I came up with as a border design to complement my swirl meander in both the brown border and in the line dancing in the 4 patches.  I really like how it looks in the 4 patches and it really filled up the same nicely. 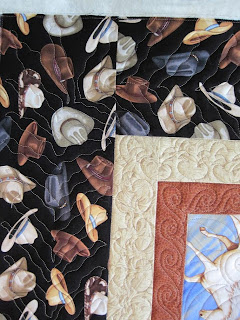 The tan border has a one of Sue Patten's border designs in it.  The outer border has a fern feather in it.
Posted by Thread Waggle Quilting at 7:35 PM No comments:

Theresa has been busy again!!!

My friend Theresa has been busy again.  She sent me a couple tops to quilt.  The first is a scrappy batik quilt that she made with 6 inch finished squares 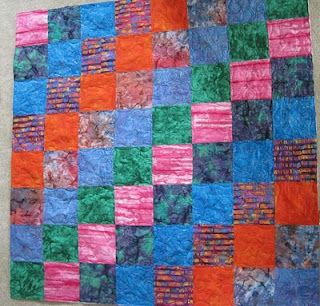 I quilted it with line dancing in a denim blue thread that blended in with most of the fabrics. 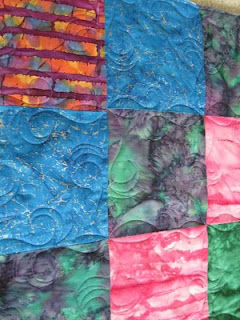 Theresa worked on the second quilt while she was here helping us move in April.  It is also scrappy, she decided to put a solid black border on it with pieced corners.  The wide black border was screaming for a thick variegated thread.  After laying the same color way of King Tut, Rainbows and Lava on the top, Lava won. 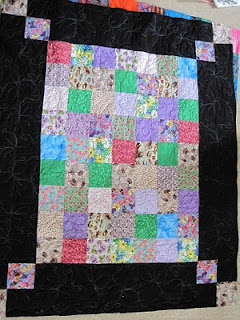 I quilted it with an allover Pothos leaves and tendrils design.  I love this design because it adds a lot of movement and it is a blast to quilt.  I really get into quilting the tendrils. 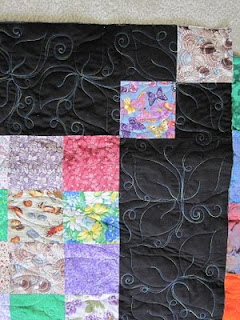 Posted by Thread Waggle Quilting at 3:23 PM No comments: