In case you missed my early post on Wreath Quilts.  I delivered 3 of these while I was in Houston this fall.   The were all custom quilted.  When it was time to tackle the 4th one I decided to see what could do that would be pretty, but would be edge to edge all over.  To do this I could not change threads like I had on the first 3 so I had to decide what color to use, I went for a mid tone beige.  I thought that if I went with Christmas red or green that it would compete with the wreath design in the beige areas.  I really like the way this quilt turned out, so much so that I did the 5th Wreath quilt the same way. 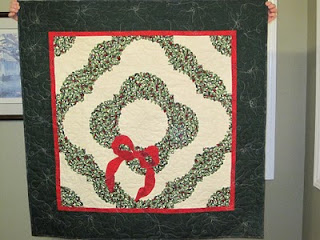 It is quilted with an all over Holly and Berry design that I made up as I went.  This is another all over that I am sure that I will use a lot in the future.
Posted by Thread Waggle Quilting at 9:07 PM No comments:

I got to do a very special quilt for a customer.  She made it for her daughter for Christmas.  It is a memory quilt with pictures of her daughter and son growing up.  Judie did a beautiful job on this quilt.  She has the pictures professional printed on fabric.  This is her very first print and she did prairie points.  They were already attached to the top when I picked it up.   Since the backing need to be turn under and stitched, I need to leave space on the edge of the quilt. Here is a picture of the quilt on my frame.  I used low tack blue painter's tape to make were I did not want to stitch so that I did not have to mark the quilt with a marking pencil, pen or chalk.  It worked really well. 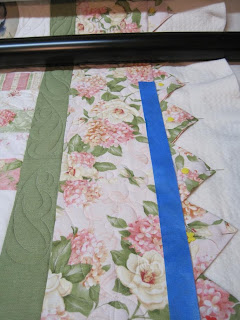 Did you also notice the flat head pins I used to pin down the prairie points.  I did this on all 4 sides making sure that all of the pins were parallel with my rollers.  It worked really well.  I also did long basting stitches to mount the top so that it would be easier for Judie to get them out when she was hand finishing the quilt edge. 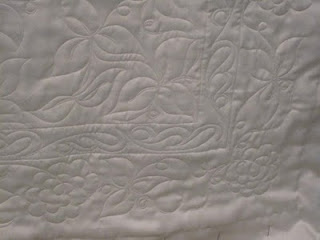 You can see the flowers and leaves I did in the outer border, the feather and hook in the inner board and the all over leaf freehand that I did in the main body of the quilt. 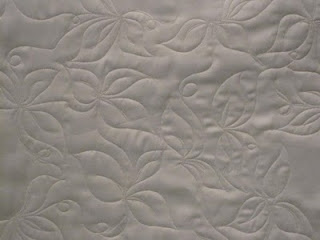 I really like this all over leaf freehand.  I am sure that it will be a go to all over design.  It really adds a lot of dimension to the quilt. 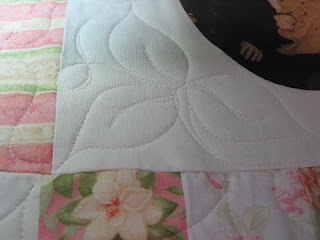 The neat thing is that I am able to use it to frame things like the pictures on this quilt, as you can see in the corner of the block in the picture above.  It was a great choice for this very feminine quilt.
Posted by Thread Waggle Quilting at 8:57 PM No comments:

I thought I would post a couple pictures of some of my recent customer quilts.  This one was done by Emily for her daughter.  It is a pretty quilt, I did all over quilting with loops, flowers and butterflies.  The quilt turned out really cute. 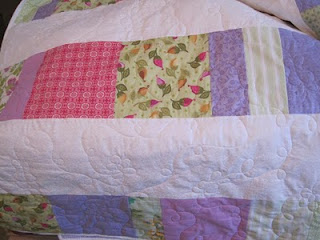 Posted by Thread Waggle Quilting at 8:44 PM No comments:

I just realized that I have not posted since the beginning of December.  It has been a really busy month!  I got all my customer Christmas quilts done a little early.  Yeah!  I probably could have taken more then I did, but knowing that we were going to Disney, I wanted to make sure that I could get the ones that I committed to done and back before we left.   I got them done the week before we went so that was great and I got to relax while we were there.  I did take an additional quilt it that I did between my return from Disney and Christmas.  I had a little open space and and she need a quilt done by Christmas so it was a perfect fit for both of us.  I am hoping to get a little time this evening to post some pictures.   I quilted quite a few first quilts for different people.  It is refreshing to get to know new quilters, they are always nervous to give me the tops, but so excited to see their quilts.

The new house is progressing and I will try to get some pictures up of it as well.  The outside is painted, the drywall is in and the driveway and sidewalks were poured last week.

The current house is putting up a bit of a fight.  The oven quit working last week.  We went out and looked at new ovens and then called GE to see how much it would be to fix the current one.  The repairman was out today and we got a new glow strip installed.  At least now I don't have to buy a new range.  :)  I do have to buy a new over the range microwave, the repair took one look at it and said replace it, it will cost a lot more then a replacement for me to work on it.    I thought I had blown up my vacuum on Sunday.  It was just a case of it sucking up something that didn't agree with it.   Matt fixed it... I so love that man!  He could not fix the new flat screen TV with will no longer turn on.  He called Samsung and it is still under warranty.  They are actually sending a tech out to the house to fix it.  I was sure that I was going to have to pay to have it shipped to a service center.  What a nice surprise.  And before you think there is something up with house, Matt's truck is trying to die as well.  I think we just keep things too long.  :)

We had a wonderful Christmas with Matt's family.  His sister and brother-in-law rented a house in Duck, NC, on the outer banks, and invited his parents and us to come with them.  The twins are doing great and we all had fun spoiling them.  We are all looking forward to next year when they will be a little older and able to open presents.
Posted by Thread Waggle Quilting at 12:31 PM No comments:

I stayed up to 1AM on December 1st so that I could register for MQS.   It was really easy this year and I got all the classes that I wanted.  YEAH!  I am so excited!   If someone would have told me a year ago that I would have been up at 1AM to register for quilting classes I would have thought they were nuts.  Funny how life can change so much in a year!
Posted by Thread Waggle Quilting at 8:20 PM No comments: