Having fun in the border

I had a chance to do a quilt that had a border of black triangles with a small gray band of fabric. I wanted to so something to make the inset border come alive. It is on a scrappy quilt with a white back ground. I choose to do like dancing in the smaller triangles and then did a feather and swirl in the larger trapezoid. I wanted it to work with a feather that I was using in the border. 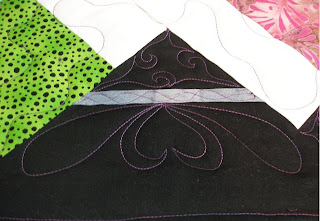 Here is the feather that I was using in the corner and the and more of the line dancing. There were small diamonds between some of the inset triangles that I also did line dancing in. The quilting was done so that we the quilt is trimmed so that the binding is near the points, the quilting will be slightly inside the binding. 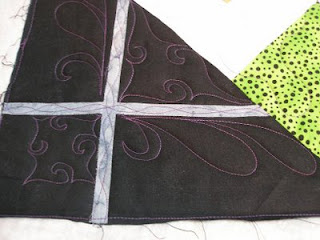 This was a really fun quilt. I did a simple meander in the center of the quilt so that the patchwork would be what was seen. The same purple variegated King Tut thread was used on top and Masterpiece was used in the bobbin.
Posted by Thread Waggle Quilting at 4:36 PM